Watering by hand nearly 200 bonsai and accent plants is undertaken by volunteers for the Bonsai Garden at Lake Merritt, when all systems fail. The task is challenging and in the summer months necessary two to three times in a single day. 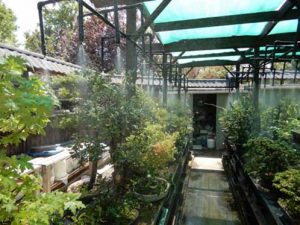 Bonsai experts all agree watering bonsai is critical in the care and maintenance of bonsai. Overwatering and inadequate watering can be the death of bonsai. We generally do not worry much about overwatering. Although, watering too frequently can be harmful to the bonsai. Because we use special bonsai soil mixes in the potting of bonsai, over watering just drains through the bottom holes of the pot. On the other hand, inadequate watering or drying out the roots of bonsai results are usually fatal to the tree.

Joe Byrd, Chairman, Bonsai Garden at Lake Merritt, started to thoroughly study the Bonsai Garden’s watering procedures and use of Drip Irrigation and Low Volume Watering products. It was concluded that something other than the above products were required to maintain the health of the collection. 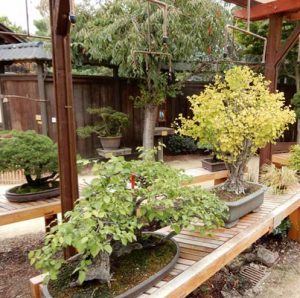 years of irrigation experience. McGregor started in landscaping in 1976 and quickly became specialized in irrigation installation.

I asked McGregor to describe the project’s specifications.

McGregor said that the requirements of the project were three-fold: 1) the system had to be effective in watering the bonsai, 2) it had to have durability to last many years, and 3) the overall system had to have aesthetics.

When McGregor first saw the Bonsai Garden’s watering system it consisted of the drip irrigation and low volume watering products, and it did not have a good appearance. The system was not effective in that some areas were soaking wet while others were dry. The drip emitters and tubing would not stay in place due to many factors – pruning needs, rotation of bonsai, animals, etc. What is specifically critical is that with Bonsai the entire root area must be watered evenly. The most successful way to do that is from overhead. A drip system would not be able to do that without an extensive amount of exposed tubing that would easily be jarred out of place. McGregor had previously used misters in greenhouses, and he saw that as the direction to go. He wanted to use copper pipe in the public viewing garden as it is aesthetic to see and also tends to disappear as it darkens. McGregor used PVC pipe that was painted black in the non-public nursery garden as black disappears and PVC is much less costly than copper. 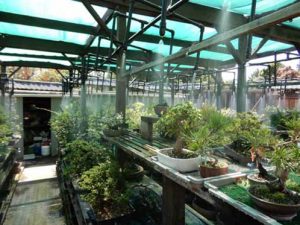 McGregor designed the test conducted in the Bonsai Garden’s remote reserve area. He installed PVC tubing overhead and attached various sprayers into the tubing. It was determined that a single micro jet sprayer worked the best at dispersing the water evenly over the test bonsai. McGregor also tested the misters at various heights above the bonsai to see which height was the most effective at watering the whole bonsai. McGregor ordered an assortment of misters that he had used in greenhouses, plus a few new ones to him. These were temporarily installed over a bench and experimented with to see how they watered from varying heights.

The greenhouse brass misters were too misty, and the micro jet sprayers won out as they were delivering water, not simply acting as foggers. The testing process was one of finding an assortment of choices, hooking them up and seeing which one delivered the most appropriate watering for bonsai plants. The testing began in late 2016 and lasted for about one month. It was deemed to be a success by the Bonsai Garden management team. Once the test was complete, it was decided to install the system in the Bonsai Garden’s nursery and watch it through the winter of 2016/2017. More staff reviewed the results, including the Curator and Assistant Curators. Joe said once they were satisfied that we had a good solution to our overall water requirements, we decided to move forward by installing a similar system in the display garden. This time we chose to use copper piping instead of the traditional plastic irrigation tubing to enhance the durability and appearance of our system.

According to Joe, the most critical factor was to make sure we supplied adequate water to the crown and base of each tree to enhance the health of the bonsai. 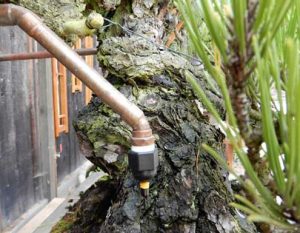 McGregor said the system had to provide specific results. 1) Cover the entire surface area of the Bonsai con- tainer. 2) Be gentle enough so that the soil was not washed away. 3) Relatively even coverage. 4) Allow for the garden to move Bonsai from bench to bench, which means the system cannot be plant specific, but must properly water whatever plant be located there.

I asked Joe and McGregor what was the most difficult task encountered in the watering project.

Joe said trying to maintain adequate coverage of the base of the tree was a concern. Several times we had to install additional misters directly above the base because the canopy was too thick to let adequate water through to the base.

McGregor added making certain that the entire surface received enough water proved to be challenging on the trees with thick canopies and on some larger bonsais. “Generally, I would answer that the most difficult part of the job would be the client, however, all the staff at the Bonsai Garden were positive, helpful and glad to see the system going in.”

I asked McGregor if he had worked on similar projects to the Bonsai Garden.

McGregor said the closest projects have been in greenhouses. Those have been a mix of mister systems like the one installed in the Bonsai Garden, and fog systems that truly are delivering mist. Since working at the Bonsai Garden, McGregor has incorporated the same design in gardens which happened to have a small bonsai bench.

I wanted to know if there was a master plan they followed for the watering project.

McGregor said this was an installation that is customized to each individual bench. The principles are observed for each bench: 1) An individual ball valve shut-off for each bonsai. 2) The misters placed close enough to yield coverage for the root area. 3) The copper pipe run as aesthetically as it could be done.

Joe added that copper is far stronger to support itself without requiring separate support. In most cases, ½ inch copper lines are used in the overhead system with a unique shutoff valve installed for each tree.

McGregor described the above ground pipe as ½ inch, Type M copper. The reasons for choosing this are that it is rigid enough to be sturdy, it carries more than enough water for several misters, and copper is pleasing to the eye in an outdoor setting, particularly once it darkens a bit. 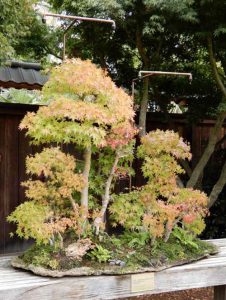 Joe summarized that the previous system we used was a drip irrigation system that constantly needed tending. The heads or soaker lines would clog on a regular basis. Even when the heads were functioning adequately,   the water did not cover the base completely on all bonsai and did nothing at all for the canopy which is an important source of water, cooling and cleaning for trees. In addition, often trees were moved and the drip heads were not turned off or on, as necessary, and not replaced properly on the trees. We did not have the ability to easily rotate a tree with static drip lines. The new irrigation system will allow us to install the bonsai on turntables that we can rotate so all the trees get sun from all sides over time.