It Started with an Idea

The concept of this garden emerged during a conversation between Toichi Domoto and Bill Hashimoto sometime after 1974. Toichi was interested in preserving bonsai produced in northern California. Bill kept this thought alive through his friend Gloria Clementson. Early in the 1990′s, when Gloria died, her heirs dedicated the proceeds from sale of her bonsai as seed money for a bonsai garden to preserve special trees. Shortly thereafter, Hideko Metaxas, president of the Golden State Bonsai Federation (GSBF), presented the concept of this garden to the GSBF board of trustees. The GSBF, the state-wide association of bonsai clubs, agreed to create two collections – one in southern California at Huntington Gardens Museum and one in northern California. Through 1994, Bill Hashimoto and his associates continued raising funds and explored many locations for this northern Garden. Seiji Shiba took over as chairman and in 1996, with the assistance of John North, came to an agreement with the City of Oakland to locate the garden at Lake Merritt. Then fundraising accelerated, and through much donated time and only one paid contractor, Steve Faulk, the dreamed of garden was built and finally opened in November, 1999.

This classic Japanese gate was dedicated to Mas Imazumi – a Bay Area Bonsai teacher for many decades. The gate was designed and built by Hiroshi Sakaguchi of Occidental, CA. He practiced, what men in his family have been doing for more than 600 years, the ancient craft of joinery woodworking which uses no visible glue, nails or screws. 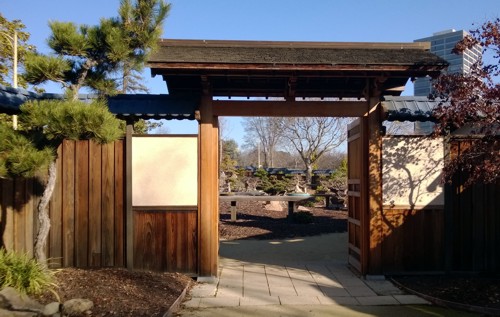 The maker is a “daiku,” an architect-carpenter, who through extensive training can build a bridge, temple, or gate strong enough to withstand an earthquake or flood simply through the tension of fitted parts. The main gate is made of Port-Orford-cedar with the darker wood being redwood. To prevent rot, the gates are anchored through granite standoffs into the ground. The copper inserts on the ends of the rafters are not only aesthetic but also keep out water and prevent splitting.